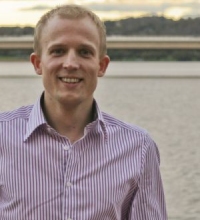 Hello, my name is Marco Ernst!

I am a researcher and lecturer in solar photovoltaics at the Australian National University (ANU), Canberra. I have been working in solar energy research since 2008. My main research interests are in processes for high-efficiency silicon solar cells and cell-to-module losses under realistic environmental conditions. Please also find my list of publications.

For my co-founded company Sinaki GmbH I am expert for the development and management of on- and offgrid solar systems. Currently, Sinaki GmbH is operating in Sierra Leone and Indonesia.

Marco Ernst studied in Braunschweig and Hannover, Germany and received the Physics Diplom degree with distinction from the Leibniz Universität Hannover in 2008. In 2009, he joined the Si thin-film technology group at the Institute for Solar Energy Research Hamelin (ISFH), Germany as a PhD researcher and received a PhD (Dr. rer. nat.) for his research on kerf-free macroporous silicon solar cells from the Leibniz Universität Hannover in 2013. Currently, Dr Ernst is a research fellow and lecturer at the Australian National University. He has published over 50 scientific publications in peer-reviewed journals and international conferences, delivered over 10 international talks and seminars, and is member of the Institute of Electrical and Electronics Engineers (IEEE) and German Physical Society (DPG). He received the College of Engineering and Computer Science (CECS) Dean's Award for Teaching Excellence in 2018.

As part of his entrepreneurial activities, Dr Ernst co-founded Sinaki GmbH, which develops and distributes on- and offgrid solar energy to developing countries including Sierra Leone and Indonesia. He developed the free mobile iPhone app TrackYourDose to raise awareness of exposure to ionizing radiation, which has been downloaded over 5000 times and highlighted in many international media releases.

The main goal of his research is to exploit the full potential of solar cells up to the module level. With this goal in mind, Dr Ernst is working on technological developments in the field of laser processing of high-efficiency solar cells and realistic modelling of solar cells through to the module. His research promotes and advances the field of interdigitated back contact (IBC) and passivated emitter and rear cell (PERC) solar cells through the development of fabrication technology and novel characterisation techniques. To translate technological advances into more efficient modules, Dr Ernst is developing holistic modelling approaches considering optical, electrical, thermal and environmental factors. His research enables the development and exploitation of the full potential of novel structures that increase the energy yield for cheaper and more accessible solar energy. He developed the free computer program SunCalculator, which can be used to generate realistic light sources for raytracing applications.